Roman Holiday is a 1953 American movie that stars Audrey Hepburn as a princess out to see Rome on her own and Gregory Peck as a reporter.

“Roman holiday” is an also an expression that Romans use to talk about Romans who are forced to stay in Rome while the vast majority of their fellow-Romans go somewhere else.

So for us Romans the expression “Roman holiday” has a rather negative connotation, because it basically conveys the idea of the holiday of those who either don’t have any money to go elsewhere or those who have to work in August and simply go to a park or some nearby beach to relax a bit.

But this year is a very particular one because of the global pandemic and travelling to other areas is rather difficult (if I were single I would travel anyways but I am a family man…).

I tried to spend a long weekend in Southern Italy in the last part of June but going to any beach (including the ones that can only be reached on foot and by hiking on long trails) was subject to a lot of restrictions and social distancing protocols and in most beaches only local residents were allowed.

So I decided to go for a “Roman holiday” this August and make the most of what we’ve got around Rome in terms of lakes and seaside.

Generally speaking most beaches we have around Rome are super-crowded and because of the social-distancing regulations I haven’t even tried to go where and when everyone else is going and I have had to think a little bit outside the box (as I always do).

And my habit of going against the grain has led me to discover this secluded beach in Lake Nemi, in the hilly area known as Castelli Romani.

Most people who visit the Castelli Romani area go to the much more popular Lake Albano, which is very easy to get to by car (but it is an headache to find parking), while Lake Nemi can only be reached on foot from the towns of Nemi and Genzano, or, for those who have some driving skills, by driving down a very narrow and bumpy road.

What’s amazing about Lake Nemi is that it’s only 28 km away from the suburb of Rome I live in.

Another way I get to enjoy what we’ve got in the outskirts of Rome is by going to the, otherwise crowded, seaside after 7 pm. 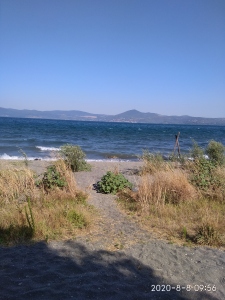 Yes, a “Roman holiday” has much to offer…when done properly….

My name is Eduardo Maresca and I am married to a Filipina. I speak Tagalog and I've acquired a great deal of experience with Filipinos and the Filipino culture and mentality that I am happy to share through this blog View all posts by Eduardo Maresca